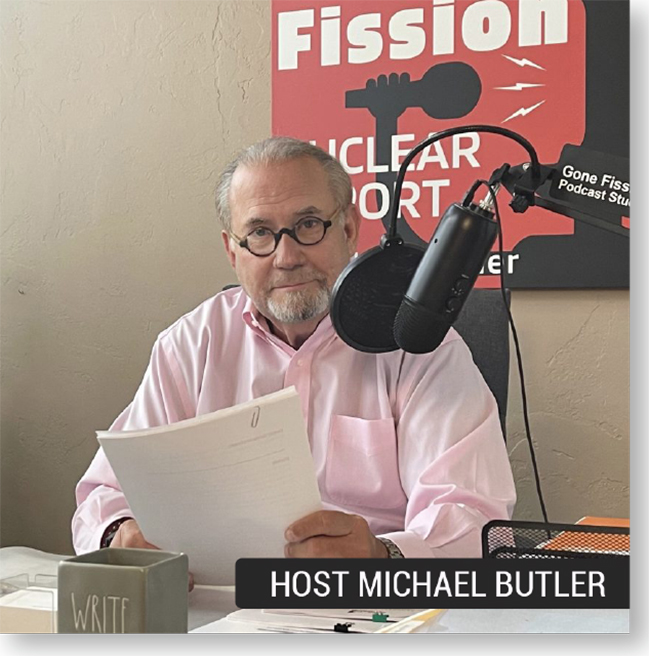 Michael Butler is the creator and host of the Gone Fission Nuclear Report. Currently serving as president of Carolina Public Relations Group in Charlotte, NC, Michael has a long and distinguished career in communications and marketing for entities involved in both the commercial and government sectors of the nuclear industry.

A former newspaper and wire service reporter, Michael served as Public Information Officer for the Department of Energy and its predecessors at Oak Ridge, Tennessee, Savannah River Site in South Carolina, and at the agency’s headquarters in Washington, DC.

His experience includes serving as national media spokesman for DOE on matters related to its facilities nationwide and performing similar work for the Nuclear Regulatory Commission and its predecessors in connection with licensing for commercial nuclear power plants nationwide. More recently, he has served as a senior consultant to corporations pursuing and performing work for the Department of Energy at facilities in Oak Ridge, Savannah River and Hanford, Washington.

Michael was also Manager of Media Relations for the Tennessee Valley Authority, the nation’s largest public utility. He served as chief nuclear spokesman for the seven-state utility and was lead speechwriter for the TVA Board of Directors. A recognized expert in crisis communications, he was a key member of a utility-wide team that revamped TVA’s Crisis Communications Plan following the Three Mile Island incident.

He has also served as chief speechwriter for the president of Phillips Petroleum Company (now ConocoPhillips) and as a DOE communications consultant reporting directly to the Secretary of Energy. Working with Westinghouse Electric Corporation, Michael founded Citizens for Nuclear Technology Awareness (CNTA), a grassroots nuclear education organization in Aiken, South Carolina, and created the annual Teller Lecture which attracts hundreds to hear a leading nuclear industry figure annually.