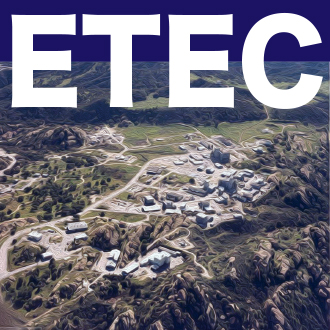 With the recent completion of cleanup at Brookhaven National Laboratory in New York, the map of remaining Department of Energy (DOE) sites requiring remediation has shrunk to fifteen.  This is a dramatic decrease from the 107 sites that were on the list when DOE’s Environmental Management office was created in 1989

Some of the remaining sites are well-known to the public.  They are high-profile, high-budget sites that employ thousands of workers–like Hanford in Washington State, Oak Ridge in Tennessee, and Savannah River in South Carolina.  But others are lesser known and more obscure.

Situated on a 90-acre site about 30 miles from Los Angeles, ETEC  opened in 1966  as the Liquid Metals Engineering Center.  It was created by DOE’s predecessor—the U.S. Atomic Energy Commission—to provide development and non-nuclear testing of liquid metal reactor components.

In 1978, the charter was expanded to include general energy-related  technology, and the center was renamed the Energy Technology Engineering Center. Research and development at ETEC primarily involved metallic sodium because the proposed fast breeder reactor required liquid sodium to operate. It operated in support of the liquid metal fast breeder reactor program which at the time envisioned a pilot plant being constructed on the Clinch River in Oak Ridge.

The center operated from 1966 to 1998 when it was closed. The site is now undergoing building removal and environmental remediation by DOE. EM completed demolition of all DOE-owned buildings at ETEC in 2021. During the year, EM safely demolished the final 18 buildings covering approximately 75,000 square feet on the ETEC site.

With the buildings gone, workers sealed the vaults, basements and other remaining subgrade structures. Those will be remediated as a future part of the project. Work continues on groundwater and soil remediation in consultation with the State of California.

The Gone Fission Nuclear Report covers the latest developments in environmental cleanup across the Department of Energy (DOE) complex. DOE is now engaged in the largest environmental remediation program in history, cleaning up nuclear production sites across the U.S. that were used to support national security missions for 75 years.

“Some of the work on these sites dates back to the super-secret Manhattan Project, a national priority to develop the first atomic bomb that helped end World War II,” Butler said. “Cleanup of these sites is a multi-decade effort, requiring thousands of trained professionals and highly skilled crafts people with budgets in the billions of dollars.”